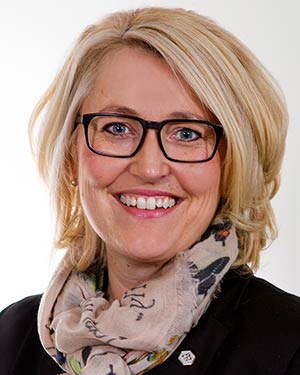 Passionate About Building a Better World!

Three fundamental values guide Pauline D’Amboise every day: engagement, education, and sustainable development. Secretary General of the Mouvement Desjardins and its Vice-President for Governance and Social Responsibility, she has become a source of inspiration through her work inside and outside the Desjardins group. Her leadership and perseverance have given rise to a sustainable development approach geared to the business world, and Desjardins in particular.

She was assigned the sustainable development file in 2003. At the time, armed with scant human and financial resources, the only way forward was to convince her colleagues to get on board. Her efforts led the Mouvement Desjardins to adopt a sustainable development policy in 2005, and implement initiatives in the areas of waste management, responsible purchasing, and energy efficiency. Next: the creation of a full line of financial products designed to encourage consumers and companies to reduce their greenhouse gas emissions through energy-saving measures for cars, homes, businesses, and factories. Since 2013, a team of consultants has been supporting businesses and support services in making environmentally friendly choices. That’s shared leadership!

In 2016, Mediacorp named Desjardins one of Canada’s greenest employers because of the participation of its employees and elected officers. Announced in the Globe and Mail, this honour is awarded to companies promoting green initiatives and integrating environmental values into their organizational culture. In the same year, Desjardins’ board of directors and senior management adopted a strategic plan with three performance targets linked to the goal of becoming leaders in the transition to a green economy: reducing greenhouse gas emissions, expanding the offer of “green and responsible” financial products, and reducing the carbon footprint of Desjardins’ investment management activities. This was a pivotal decision for Desjardins to benefit individuals and communities.

In 2016, Delta Management named Pauline D’Amboise one of Canada’s greatest authorities on sustainable development. In 2012, Women of Influence magazine recognized her as one of Canada’s most influential women in the area of cooperation and social responsibility. Sherbrooke University honoured her in the same year by appointing her to serve as Sustainable Development Ambassador. In 2010, David Suzuki asked her to sit on the board of his Foundation, and, in 2016, Université Laval named her to chair Hydro-Québec’s Environment, Development, and Society Institute.

Her commitment to sustainable development extends beyond her professional life. Pauline D’Amboise sits on the boards of groups such as CoopCarbon and CIRIEC International (International Centre of Research and Information on the Public, Social and Cooperative Economy), where she volunteers her services as a consultant. She also serves as co- chair of the Coopérative Forêt d’Arden’s Comité des Ambassadeurs for its scholarship program for young responsible citizens, the Bourse Scol’Ère. She is an active member of Alliance SWITCH, an association of business people and environmentalists committed to advancing public policy on transitioning to a green economy. And, to top it all off, she is a mentor for the Association of Québec Women in Finance.

This woman of distinction has made some remarkably sustainable achievements!