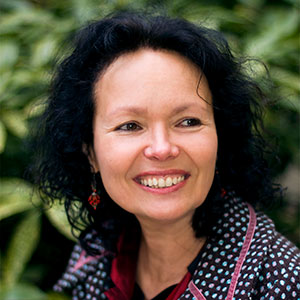 Manon Barbeau has worked for more than 30 years as a screenwriter and director for several organizations, including Télé-Québec and the National Film Board (NFB). She has directed a dozen documentaries that have won several awards.

In 2003, she founded Wapikoni Mobile in collaboration with the Council of the Atikamekw Nation and the AFN National Youth Council, and with the support of the Assembly of First Nations of Quebec and Labrador, and the National Film Board of Canada. In 2006, she founded Musique nomade, an organization for the production and promotion of traditional and contemporary Aboriginal musicians.

Wapikoni Mobile, a mobile video and music creation studio for First Nations youth, has since produced close to 1,200 films and 817 original songs. These works have been produced by young people from 89 Aboriginal communities in Canada and 45 communities abroad. 176 awards have been given to Wapikoni Mobile’s short films at prestigious festivals around the world.

In 2014, together with some fifteen international partners, she founded RICAA, the first International Network of Indigenous Audiovisual Creation.

In 2017, Manon Barbeau initiated a pan-Canadian project, Wapikoni from Coast to Coast: Reconciliation through Media Arts. The organization is doubling its activities, expanding its filmmaking workshops and its distribution throughout the land, giving a voice to Aboriginal youth from coast to coast. Since 2017, Wapikoni Mobile has been an official partner of UNESCO.

In 2017, Manon Barbeau became a recipient of the Order of Canada for “her filmmaking achievements and her dedication to First Nations youth”.

Since 2019, Manon Barbeau has been a member of the Board of Directors of the First Peoples Innovation Centre.