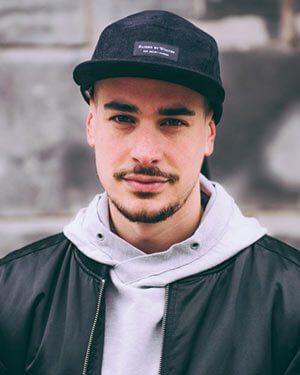 Koriass, alias Emmanuel Dubois, is a 32-year-old rapper, born in Montréal-Nord, raised in Saint-Eustache, and now living in Québec City, where his wife teaches at a junior college. He became interested in music at age 15 and launched his first album in 2008. His fourth, called Love Suprême, came out in February of this year. Unlike some rappers, whose lyrics can be violent and misogynistic, Koriass says he’s a feminist.

This how he describes himself. Still a teenager when he first stepped onto a stage, he uses different forums to advocate on behalf of feminism and egalitarian relationships between men and women. Since March, he’s been crisscrossing Québec with two feminists, visiting CEGEPs and giving talks to young people. The tour, called “Sex, equality and consent”, is an initiative of the Conseil du statut de la femme and its president, Julie Miville-Dechêne.

Koriass first gained popularity with youth for his music and unusual rap style, but then he also became known for his thoughts and writings about the notion of consent in the context of sexual relations. In an artical called “Natural Born Féministe,” his first public affirmation of being a feminist, he tells the story of his wife, the mother of his two daughters. She was raped at age 17. In his typical raw style, he explains the extent to which rape can be downplayed in our society—to the point that the person subjected to it may not even be aware that she was a victim. He also describes how his thinking evolved, as well as his ideas on feminism and the notion of sexual consent. The lyrics were shared 54,000 times on social media.

After his song was published in the blog of Urbania magazine in July 2015, Julie Miville-Dechêne invited him and Marilyse Hamelin, independent journalist and author of the blog La Semaine rose, to accompany her on a tour of nine CEGEPs. Koriass has used this opportunity to raise the audiences’ awareness of the notion of sexual consent and share with them his views on men’s role in society. He is convinced that talks of this kind can make a real difference to youth in a period when their bodies are undergoing major changes. His aim: speak to the guys.

He condemns the fact that in our society, in 2016, young men’s first reflex is to blame the women. Through his music and social commitment, Koriass stands out as an inspirational man, one who most of all wants to change things.