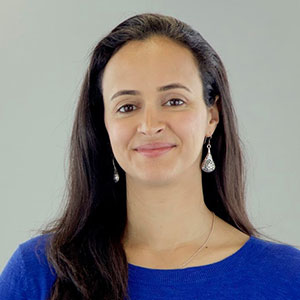 Originally from Morocco, Asmaa Ibnouzahir arrived in Quebec in 1994. A bright teenager with a clear vision of a better world, from the moment she arrived she began volunteering in different initiatives with community organizations or in schools she attended. Very early on, she demonstrated her interest in civic engagement by joining the Québec Sans Frontières program, participating in international solidarity projects.

Having experienced racism and discrimination, she spent 10 years feeling as if she belonged to two completely different worlds: on one side Islam and on the other side Quebec culture. Although the path to emancipation was long and painful, she came to the conclusion that her Quebec values were an integral part of her identity and her faith, inextricably linked together. Today, Asmaa defines herself as a woman who is Quebecoise, Moroccan, Muslim and free.

Since 2006, Asmaa has been campaigning for the emancipation of Muslim women and Muslim feminism. For more than 10 years, she has been reflecting on and advocating for human rights issues, in particular women’s rights and those of religious minorities in Quebec. Other issues that concern her include questions linked to immigration, secularism, religion in the public domain, and the status of women in Islam. A public personality, she has appeared in the mainstream Quebec media and as a consultant and speaker on these themes.

She is an active member of various international groups of feminist reformers. In 2008, she was an administrator then volunteer coordinator of the International Group for the Study and Reflection on Women in Islam (GIERFI) which offers diverse feminist voices the opportunity to discuss issues concerning their rights, their responsibilities and their roles, in order to overcome the stagnating dialogue surrounding Muslim women. Since 2015, she has been a member of the Musawah Network, a worldwide movement, led by feminists, for justice and equality in Muslim families.

In Quebec in 2013, she co-founded the Collective des féministes musulmanes du Québec which aspires to build an inclusive society built on democratic, secular and egalitarian principles.

In 2014, she contributed to “Religions et laïcité, pour un nécessaire dialogue“ and in 2015 she published her own book: “Chroniques d’une musulmane indignée“.

Enriched by these experiences, Asmaa created the first francophone university course in Quebec on the subject of feminism and Islam, which she has been teaching since 2017 at the Institut de recherches et d’études féministes at UQAM.

It was also in 2017 that she founded Institut F, an organization that aims to strengthen the leadership and promote the transfer of knowledge and the intellectual, social and spiritual development of Muslim girls and women in Quebec. This initiative is achieved through education, research and development programs designed primarily by and for Muslim girls and women. Asmaa’s ambition is great: to make Institut F an incubator for French-speaking Muslim women as they become leaders pursuing a reformist, feminist and decolonial dialogue.

All of her achievements have positively influenced many Quebec Muslim girls and women and allowed them to take ownership of and get involved in the domains that were denied them. Her impact has reached beyond Muslim communities as her book is studied at CEGEP and university. Her ideas and values on the empowerment of Muslim women and their affirmation of the cause of social justice and equality are being discovered by a new generation and will help change mentalities on both sides.

It is thanks to her years of work in the field that Asmaa has gained the recognition of her peers for her views on an ideal of justice and equality for Muslim girls and women. Dozens of women have embraced her vision at Institute F and have been inspired by Asmaa’s ambition to defend the rights of Muslim women within their communities, demonstrating that the Muslim faith is not contradictory to feminist values.

In this sense, Asmaa is a real source of inspiration for the women who struggle every day in their communities to change mentalities towards more equality and justice. As a passionate spokeswoman for both faith and equality, she contributes to the evolution of feminist thought and to a more tolerant world.